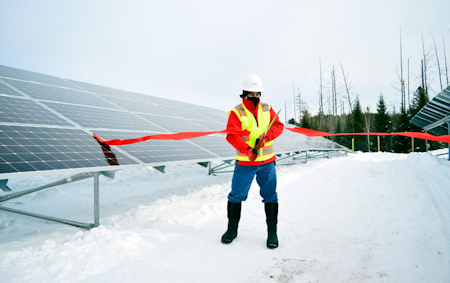 As originally published on adirondackdailyenterprise.com.

Hassman, of RER Energy Group, was the site manager and installer of the 25 rows of solar panels on the east side of state Route 86. He said the farm has been operational since Dec. 28. Friday’s event was a formality.

However, these panels are not producing much energy yet.

Several inches of snow blanketed the panels. Gordon Smith, the project manager with RER, said the sun’s energy can penetrate through a moderate layer of snow to the solar cells but that the snow seriously reduces the amount of energy panels can absorb. This is all calculated into their yearly estimates; the panels just produce less in the winter months.

Smith explained that Hassman’s son and his son’s friend — both RER employees — were only clearing off the solar panels so the attendees on Zoom could see their handiwork.

Mike Roach, director of business development at Sunvestment Energy Group, said as the snow melts, production will get better over time, comparing this seasonal ebb and flow to a farmer’s growing season.

Though the often cloudy northeastern New York may not seem like a great place for a sun-reliant energy farm, Hassman said there are actually benefits to this area that other regions do not have — namely, the cold. He said energy harvesting is slower in warm weather, so Friday morning’s cold was a good thing. The temperature had been between 10 and 20 degrees below zero earlier that morning in Saranac Lake and was in the single digits when the ribbon was cut.

“The panels in Arizona that are hot are hampered by the fact it’s so hot there,” Hassman said. “The flow of electricity, because everything becomes hot, there’s a lot of resistance there. So on a cold day like today with really clear sun, you’re really cranking.”

The energy harvested here will be put into the electric grid, but residential and commercial customers can subscribe monthly to the solar service and use the electricity credits generated by the farm as part of their National Grid power bill for a 10% savings. There is no subscription fee.

Adirondack Medical Center, less than a mile down the road from the farm, will receive around half of the energy produced there. Sylvia Getman, president and CEO of Adirondack Health which runs the hospital, referenced the Hippocratic Oath in the Zoom call, specifically the line, “Do no harm.”

She said hospitals use a lot of resources — for example, AMC’s lights are always on — so she was glad to source its electric power in a green way.

RER Energy Group President Jim Kurtz said the solar array has an estimated lifetime of 35 years and that in that time it is estimated to produce $9 million worth of electricity.

He said it is cheaper to build and operate solar facilities than to operate already-built coal-powered plants.

Smith said solar panels are made of better, greener materials now than a few years ago.

Also, Hassman said, “We use a recycling program for panels where they take the silver and stuff out.”

The solar site will also be pollinator-friendly. In the spring, AdkAction — a Saranac Lake-based advocacy group — will spread a wildflower seed mix to attract pollinating bugs and birds. Hassman also said the fence around the property has a gap underneath so little critters can crawl under and graze.

The farm’s 10 acres are on a lot owned by Lee Keet of Saranac Lake, who bought the property in 1999 to block a potential Walmart. Keet donated the land to this solar project last year.

“We wanted to stop that as well as put a little value on the land beyond its use for a mall,” Keet said Friday. “We could benefit us instead of Wall Street or Bentonville, Arkansas (the home of Walmart).”

Keet said the spot is perfect for solar harvesting. It is near power lines, in a hamlet zone — the most lenient of state Adirondack Park Agency classifications — and away from people’s homes, for the most part.

Still, he said, it took three years to get approval from all the state agencies and to set up construction and customers.

Smith said, however, that this was a relatively easy site as far as preparation went.

“It was not a heavy lift to get permitted here. Sometimes it is,” he said.

Smith said the land had been logged before and had only second-growth trees.

Lt. Gov. Kathy Hochul said she was proud the project would stop metric tons of carbon dioxide from entering the atmosphere and was grateful for the people who got it done. She said it contributes to the state’s goal of producing 6 gigawatts of solar energy by 2025.

State Sen. Dan Stec, R-Queensbury, said he spent eight years in the Navy’s nuclear power program and that he likes to see a wide array of energy sources used. He is also the top-ranking Republican on the Senate’s Environmental Conservation Committee.

Assemblyman Billy Jones, D-Chateaugay Lake, said he likes that the project focuses on the community and benefits locals.

Kurtz said his company does more solar development in New York than any other state.

“New York has more favorable policies than those states,” he said.

As originally published on adirondackdailyenterprise.com.